I sat on my glider bench and watched muskrats last week. To me, there's something inexplicably primeval and fascinating about them. After reading Louise Erdrich’s The Night Watchman, in which she uses the Anishinaabe word “wajashk” to describe them, I haven’t been able to get that word out of my mind - it seems to suit these creatures perfectly. In Native American folklore the muskrat is the Earthdiver, the one who brought mud up to the surface for life on land to be established.

I watched and waited for the telltale ripples to appear on the surface. Without a breeze to stir up the water’s veneer, it looked like a dark horizon, solid and flat, as impenetrable to the eye as a tropical forest canopy would be from above, preventing one from seeing the ground. When I noticed the red maple flowers floating on the surface, I thought of them as clouds drifting across the sky above a jungle.

Every now and then, bubbles or ripples broke the surface - concentric rings expanded outwards like a newly forming universe. At that point, the interface between above and below was less distinct, and the 2 worlds coalesced, with a muskrat head appearing in between, a part of each. What an incredible animal, able to live and breathe in both realms. Maybe this is why I admire them so much, why I'm drawn to their mystery, and why I can relate to the reverence that native tribes have for it. (Plus, of course, my own romanticization of Native American myths and legends; I seem drawn to these more than to fairy tales with princes and princesses.) It looked at me, and I was close enough to see a glistening drop of water above its eye. 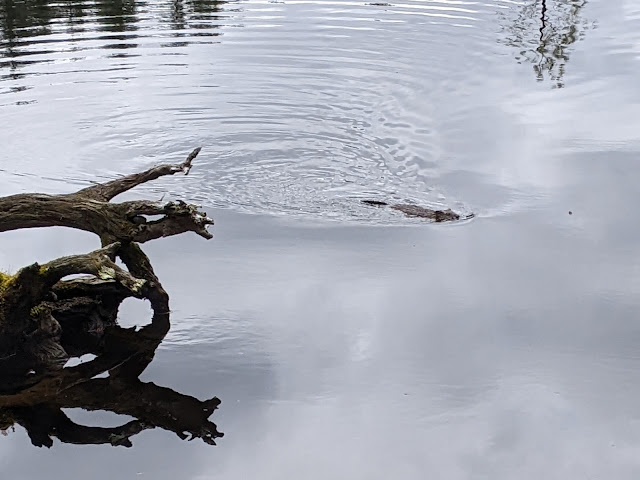 Then it dipped back down, its tail following the arch of its dive in a graceful curve. I could see the scales on its tail as it performed this maneuver. I watched it glide through the coppery shallows, with bubbles of air trapped within its fur, making it look as if its body were covered with metallic grey spikes, like a steampunk hedgehog! It swam into the underwater entrance to its nest, creating a mirage-like effect as it stirred the loosened sand. I knew from previous observations that they take forever to come back out - it's as if they go into their burrows, put on a pot of tea, make their beds and take a nap before they come back out again, refreshed. So I sat back to enjoy the audio company of woodpeckers, chickadees and phoebes, and watched the stilted movements of a crow strutting through the leaves on the other side of the cove. The allure of embryonic ferns, coated in what looked like white vernix, but was really the furriness surrounding new fronds, held my fascination. Their stems looked like a backbone waiting to unfurl from a yoga position. 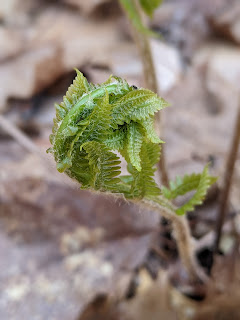 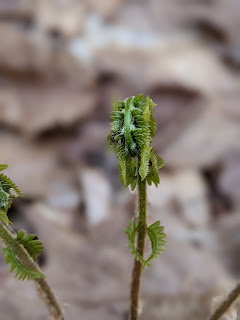 A movement off to my left, on a mossy log extending out into the water, caught my attention, and I was graced with views of the other half of the muskrat couple, this one out of the water. It looked like an overgrown rat, sodden and hunched over like an old man in his raincoat. Its fur had the appearance of having had a pomade applied, as in a hair product, to repel the water. Wait! Maybe our waxy hair products are based on muskrat fur’s water repellent properties - I’ve got it the wrong way round! Then it scuttled, beetle-like, to a drier spot and began pulling at a long piece of vegetation that seemed endless. I waited for it to finish before giving in to the barrage of black flies.

Later, as I ate my dinner inside, I saw a bobcat walking on the other side of my cove.