The flavor of marmalade on my toast at breakfast sparked an incredible sensory memory ... of the thick, yellow and citrus-sy multi-vitamin syrup my Mom would give us as kids. She wasn't big into medications or supplementary vitamins, but the clinic she visited every month would hand it out, so she dispensed it. We loved the taste - it was very sweet and orangey.

There was a monthly well-child clinic held at a local church hall or other such community space, where all the families would stand or sit in line for their turn at one of the nurse stations set up in the stark, wooden floored hall. No appointments were made - you just arrived, stood in line, and waited your turn. There were about 6 or 8 different stations set up in the open hall, without curtains or privacy.

It was a challenge for the mums to keep 3 or 4 toddlers, and a baby, in check with no stimulation or distraction provided. My Mom didn't take us there with books or snacks (never mind video games), just each other. She simply dealt with the fighting and melt-downs, as did all the other moms. The sounds of children stomping, chasing each other and shrieking as they slid and hit their heads on the floor, and landed in a heap, was a familiar sound. Despite there being a lot of crying, screaming (especially during vaccinations) and giddy laughter, the wooden floors would echo and creak initially as we made our way to the folding chairs lined up around the outside of the room.

When our name was called, we were ushered to one of the temporary stations, and each child's development recorded. Babies were weighed in large, scooped metal scales, cold stethoscopes were pressed against chests, and vaccinations were given. Wellness checks and vaccinations weren't done at a doctor's office as it is here in the U.S. Each child had a registration card where details were recorded. Watching some British shows like 'Call the Midwife" had scenes that were somewhat reminiscent of this, as shown here: 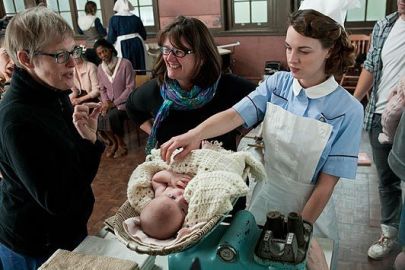 The nurses were available to discuss any concerns, and gave advice to new mums about feedings, problems, and stages of development. They provided milk powder and multi-vitamin syrup to their patrons. I recall being seen for what were described as 'blotches' on my upper arms - inexplicable round, white looking patches of skin in only that location. They weren't itchy, just visually noticeable. It was recommended that I eat lumps of ... BUTTER ... to fix it! I was given a chunk of it every now and again, and have no idea what it was meant to have done or what the condition was. I must report though, that I no longer have white blotches on my arms.

These clinics were offered during the sixties and seventies in White suburbs during the Apartheid era. In my understanding, this was a mobile community service in which no money or insurance information was exchanged. Though separate clinics were available for the Black population in the rural and remote areas designated to them, services there were hopelessly inadequate - overcrowded, underfunded and understaffed - and not necessarily within walking distance.

I think that I remember more about these clinics than my siblings, since I was the second eldest, and I was 9 when my youngest sister was born, so I was actively involved (and very interested) in her care. My Mom had some surgeries after the youngest was born, and it fell to me to take on my Mom's role to help out, much to my delight. I do recall a horrible feeling of guilt once whilst carrying my baby sister in my arms to the car to visit my Mom in hospital. I slid and lost my footing on the long smooth grass-stalks that were lying over the sloped, rounded curb where the car was parked on an incline and she and I fell to the ground. I've never forgotten her distress, and the feeling that I was to blame.

On a visit back to South Africa in 1994, with my own daughter around 10 months old, I visited a similar such clinic to get her weepy eye seen to - they referred me to a surgeon for a small surgery on her tear duct (something I had done as a baby too).

Aw, but you were only nine!

Fascinating! Pictures of me as a baby in a similar type scale were brought to mind. Hey, D had a surgery on her tear duct, too!

Only 9 ... Yes, thanks for reminding me. ... But still felt the responsibility deeply

More tear duct experiences! Wow, more common than one knows at the time of going through it.

Enter your Email address here to get Updates on my Posts