I recently watched an interesting TV show called Bushmen: Hunting for their Survival on my Amazon Prime account.

Since then, I haven't been able to shake the wildly insane scene of the researcher, Dr. Flip Stander, flying a microlight craft with a drugged leopard strapped onto his back! Seriously, I'm not joking. In case you don't believe me, here are some shots I took of my TV screen: 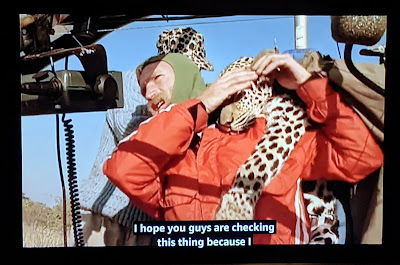 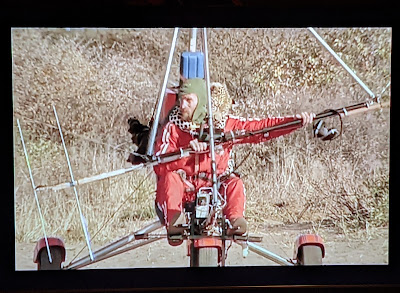 Who would do such a crazy thing, I wonder? Coming from southern Africa, the general area where this took place, I can relate to the common mindset of " 'n boer maak 'n plan" (literally, a farmer makes a plan, or a farmer will find a way to make things work. It's basically the same as 'necessity is the mother of invention'). Circumstances sometimes force novel solutions to be devised.
During the Apartheid era in South Africa, when embargoes and boycotts isolated academics, artists, researchers and scientists from international exposure and collaboration, we got used to having to develop a work-around - this inadvertently sparked new avenues of research and development locally. It encouraged resourcefulness, creativity and resilience. I think this is what this crazy, insane mission speaks to - a leopard was caught killing cattle and needed to be relocated, so this is how they figured it out, independently, and without asking for funds or help! This solution seems particularly wild and dangerous, though.
Here's a link to the show about this Flip-ping wild researcher:
https://www.amazon.com/Bushmen-Hunting-Dr-Flip-Stander/dp/B074HNMP9F/ref=sr_1_1?dchild=1&keywords=bushmen%3A+hunting+for+their+future&qid=1614739599&s=instant-video&sr=1-1.