Do you have something in life, that no matter how many times you try, you just can't get it right? I do ... I try to make a Black Forest Cake for a special occasion each year, and though it always tastes delicious, it never LOOKS good. Something seems to go wrong with the presentation each time - it's either lopsided, breaking apart, or the layers are just sitting askew on top of each other. It always gets eaten, is guarded jealously, and I get numerous compliments about the flavor, but still, I would dearly like the cake to look appetizing as well (not like the pseudo-trifle look I end up with).

Okay, so I must admit ... for a few years, I'd had a mental block about it, which got in my way. I'd beaten myself up so much about being unsuccessful in the presentation of this cake initially, that I'd developed a negative and hopeless attitude towards it. My perception of it being my nemesis, an insurmountable obstacle I'd NEVER get better at, meant I tackled the recipe with trepidation and foreboding before I'd cracked the first egg. It just fed the fires of my inability to succeed.

There have been some instances where I've sworn emphatically that I'll NEVER attempt it again in my life, EVER. On one such occasion, I had sliced horizontally through each of the cake layers, and then pieced it back together, one layer on top of the other, with a filling of frosting, brandied cherries and whipped cream in between each. The cake was unbelievably high (and quite unstable). I placed it in the refrigerator to keep it fresh, only to find that the layers had slid off sideways, spilling the filling all over the fridge, and spreading chocolate-y goo against everything it came into contact with. I was devastated.

But then, as the year went on and the memory faded (like the pain of childbirth), I'd think that maybe next time, the highly desired Black Forest Cake would not defeat me. Knowing that most times in the past it hasn't turned out to be as visually pleasing as I would like it to, this year I was determined not to be concerned about its looks, since the mish-mash of chocolate cake, black cherries, chocolate frosting, Kirsch and whipped cream definitely tastes delicious, even though it looks like it's been through a cement mixer. What's not to love, right? Shield your eyes from this ugly monstrosity I created below: 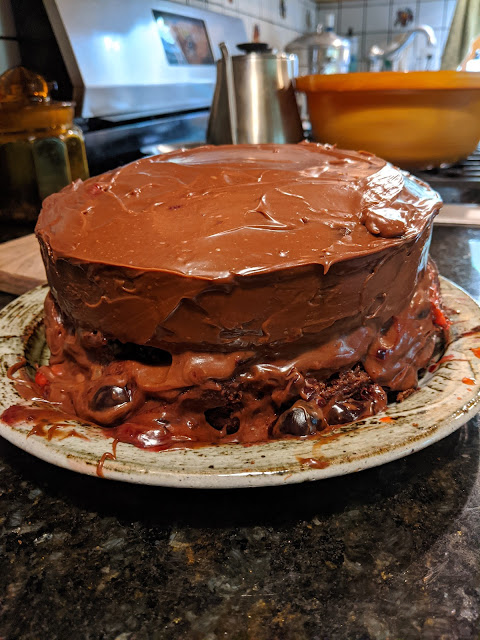 This year, I approached it with unusual and uncharacteristic nonchalance, but that ended in a fiasco, too. In trying to remove the baked cakes from the pans, one separated itself from the base in several chunks, while the other came out cleanly, but quickly flopped into 3 distinct and separate pieces on the cooling rack. I'd been SO confident this time, that I'd not read my flour labels - turns out I'd mistakenly used the blended wholewheat and white flour mix for making breads, instead of regular All-purpose flour. Oh, woe is me!

With COVID stress hanging over everything we do already, I realized that I couldn't afford to have my usual Black-Forest-Tantrum - it would only send me into the Black-hole of hopelessness. Instead, I used the frosting like glue to stick the crumbly cake back together, chalked it up to experience, and had a slice of cake, as Marie-Antionette suggested.

Well, the piece of cake at the top of the post looks VERY yummy. I was amused by this story, even though I could also empathize with your frustration. What is it about SOME things that we just can't get? At least you didn't stress about it ahead of time...so maybe it was more of a success since you enjoyed the process more? PS: Nothing wrong with a trifle,lol. As my father used to say, it all ends up in the same place.

We enjoy it no matter what it looks like, but somehow ... I want it to look good, too. I'm told that maybe practicing more frequently would help me ace the presentation! I had so much fun recounting my tribulations with this delicious cake :-)