Oh, woe is me! I can't figure out if I feel proudly accomplished as an amateur botanist, or notorious for being the discoverer of bad news! Perhaps the right description is notoriously accomplished?

At the end of last week, I encountered a curious-looking plant, very similar to one I already knew, but this one was, well, grotesque and very robust, by comparison - the 'floats' holding the flower up out of the water were fat and bloated. 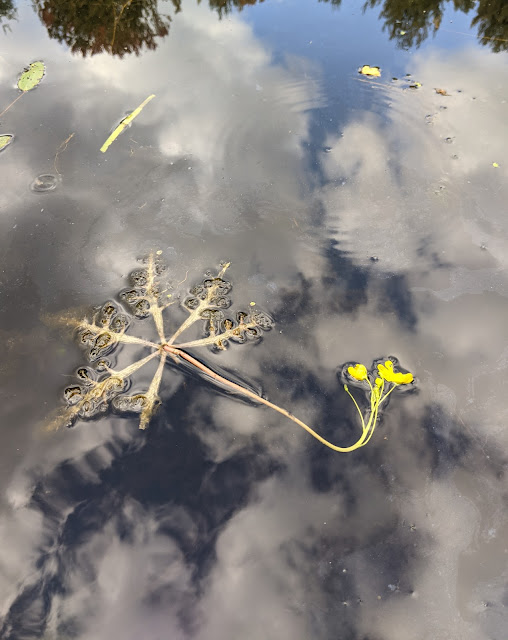 Alarm bells started tinkling, and then clanging, in my head. I took a series of photos without handling or disturbing the plant, then went home to peruse my aquatic plant books to help me sort through my suspicions ...

Everything I read filled me with dread, for it seemed I had found a plant not previously documented in Maine, and possibly invasive. On the other hand, I was thrilled that I had found something potentially exciting, a new discovery!

My mixed emotions about my find had me jostling about in bed for hours that night, as I pondered the implications - this plant's range is for the southeastern coastal areas of the United States, and now here it was in my Maine lake. I had stumbled upon it whilst searching for the notorious and insidiously invasive Najas minor, which I had newly discovered in our lake last year.

The Invasive Species Program Director for the Lake Stewards of Maine advised me to go back and retrieve the plant for sampling and positive identification. It seemed to be the swollen bladderwort, Utricularia inflata. The panel of "official" scientific verifiers have an established process to follow in order to reach an ID by consensus about a species heretofore not documented in Maine. Characteristics such as the length of the spokes, the shape of the floats (wedge shaped or parallel), the number of flowers on a raceme, the nature of the flower stalks (curved or upright), as well as the size, and coloration, of the flower needed to be assessed.

The sample I brought home the following day was already past its prime since it was so late in the season, but I managed to keep all the parts together in a basin of water as I paddled back. I jiggled all the algae, sediment and other debris off it, and washed it through many times before laying it out for drying and pressing. The more I looked at it, the more sure I became, even though I had never seen it before! I felt confident. It somehow seemed unnecessary to measure and deliberate over it - the more I looked at it, the more unmistakable it became.

I'm astonished at how much excitement and exuberance other botanists have shown about my find. There were phone calls, emails and texts back and forth from experts, and each wanted to be the first one to call Professor X, or Dr. Y, and let him, or her, know the news. Some shrieked with joy and excitement like a kid in a candy store! The enthusiasm generated was like being among bird watchers who wanted to "GRIP" a new species, a 'lifer,' the kind best described by Bill Oddie as 'a cosmic mindf@cker!' The authors of the "Aquatic and Wetland Plants of Northeastern North America" are hoping to include this new distribution information in their upcoming revised edition.

It feels strange to have the Invasive Species Director jokingly tell me I'm not allowed to go out on our lake any more, for fear of what I might find next!

I could so imagine your mixture of emotions upon this discovery.....are you the harbinger of bad news? or the bearer of good news since you actually uncovered this nasty little beast? If you were a doctor, and found a very strange, rare form of cancer inside an innocent body.....it would feel the same, you celebrate the discovery for you can potentially help other water bodies be on the lookout to mitigate it's arrival on their shores. I am so proud of you my friend!

So glad you understand the quandary of discovery and dread in one package. Thanks for the kind words.