I took these photos of what looks like I drove into a kayak (or that a kayak came through my window) after my aborted attempt to open the back hatch of our compact little car at the end of my invasive plant survey. 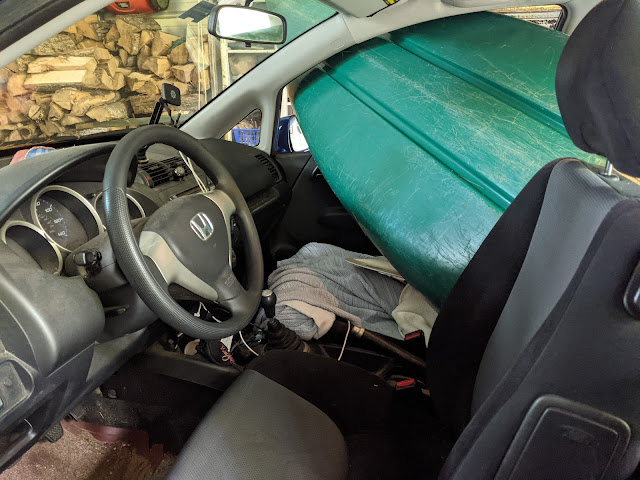 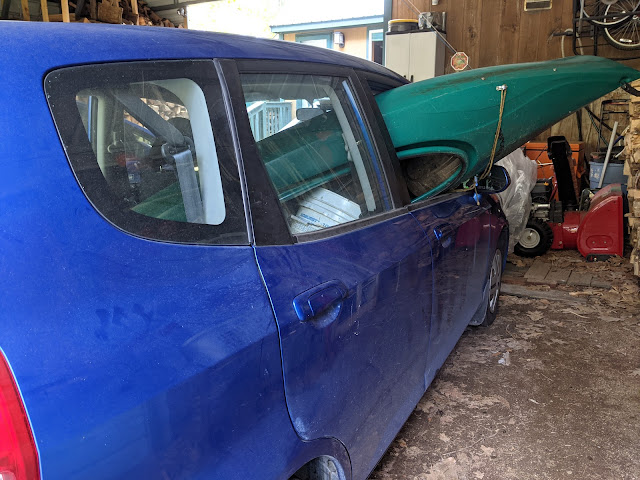 For some reason, at random times, the back hatch won't open, and we haven't quite discovered why, or how to overcome it in a secure, foolproof and consistent manner - it usually just requires a lot of key-in-lock jiggling, latch clasping and unclasping, fiddling with the latch mechanism from the inside, banging on the chassis, or spraying lubricant into the lock.

I was tired and dying to get home for lunch, and none of the tried and tested 'tricks' had worked. I felt as if I was going insane - we're all familiar with the quote, “insanity is doing the same thing over and over and expecting different results." So after about 20 minutes of insanity, I decided to try a new approach that would not require asking for help, knowing that it would probably take Dale's touch just 10 seconds to open it!
I opened the side doors, pushed the driver's seat forward and downwards, and wound down the passenger side window, then ever so carefully and gently, needing many reevaluations and repositioning, I pushed my kayak through the driver's-side rear door and out through the passenger window! There wasn't a way to rotate the back end of the kayak past the back door towards the extreme back of the car so, JUST able to close the side door, I decided this would do. I was actually pretty chuffed with myself! I then had to reposition the driver's seat and hope there was enough room for me between the backrest and steering wheel. 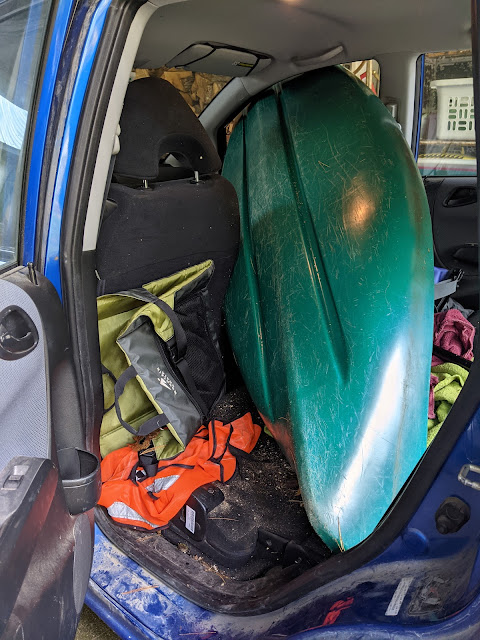 It wasn't easy driving home, especially turning left across traffic at intersections when it was hard to see what was coming on my right. I maneuvered over to the right, skew, so I could see the oncoming lanes out the front window and then have to do some extra correcting to get across and on my way - turns out I didn't encounter any other cars en route home, so I didn't even get honked at! 😀

and 10s was accurate!

If I can't unlock/open it, I unstick the spring by pressing the handle back toward the car, then lock and unlock the car again (assuming yours has automatic locks) and usually I hear a louder unlocking click that lets me know it worked. My mechanic has fixed it a few times using (I think) WD-40 and it has worked for a few months each time. I hope that can help yours too!
-Carrie

Thanks for your helpful feedback, Carrie. We have taken the panel off the inside of the hatchback door, and have left it that way to help us deal with the problem. Our trunk doesn't spring back open ever, soon the problem could be somewhat different, but we've noted your tips.