My constant surveys of the lake to find growing locations of the invasive naiad (Najas minor) means that I've been leaving my kayak at the shoreline instead of tucking it away on our handy rack each day. This has been fortunate on two occasions this summer, when people on the lake unexpectedly needed assistance. It meant I was ready and available for a rapid response.

I looked outside one Sunday (9/27/2021) and saw an empty kayak drifting quite quickly past our cove, and a little way behind it another, this one capsized. I called out to Dale that we needed to investigate, and we took off down to the water's edge.

I could hear cries of "We're okay! We're okay!" We saw one woman in the water holding onto her capsized kayak and trying to follow after, and grab, the renegade, free-floating one. Her mother was standing soaking wet in the shallows, calling her grown daughter back to shore. A power boat approached them to check if they needed help, but the woman in the water insisted they were okay. I headed for the runaway kayak, and Dale tried coaxing the immersed person to shore, but she couldn't give up on the quest for the renegade kayak, and kept heading back in that direction. Dale took hold of her kayak and began 'herding' it to shore, but he was being consistently opposed by the woman's quest to reach the other kayak (which I was now towing back to them) and her refusal to let go of her own kayak. It was a little like a goat rodeo, even though there were just 2 people involved (they had been drinking, as evidenced by the contents of their spilt cooler, and behavior). After many unadhered-to directions, both woman were on solid ground and reunited with their kayaks.

We have been isolating, and wearing masks in public, especially if in the company of people we don't know, but this emergency reaction precluded reaching for masks before leaving the house. We were eager to disengage as quickly as possible once they were safe and comfortable. The older woman explained why they were out there, that she'd lost her husband a few months ago (which was obviously alarming, though we didn't dare ask what he'd died of), and she was now having to deal with her adult handicapped daughter on her own. She was so very thankful and highly emotional, even recalling that we'd waved to her last week as she went by.

Now she wanted to give us a token, she said, which she'd been doing since her husband's death, and pulled a gemstone from her bag, explaining the special meaning and powers of the amethyst. We commiserated with her over her loss, and I said I'd love to receive one of her tokens, so she gave it to me and wrapped her hand tightly over mine, gripping it with steely, yet shaking, emotion as she tried not to cry. It was SO hard not to reach out and put my arm around her! In order to get her to let go of my hand, I said I'd like to take a look at the beautiful stone, so she let go to let me admire it. 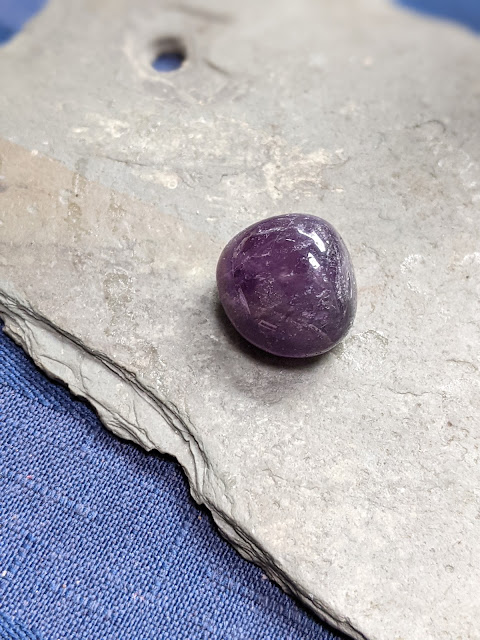 I used this opportunity to put some space between her and I, (Dale had managed to stay out of reach) and we watched them settle themselves back into their craft. The wind was gusting quite strongly (they'd said that was what had caused their initial capsize) and they must have been quite cold as they set off home, dripping wet from the 65°F water and being blown by the strong wind. Brrrrrr. I was glad I was dry.
They cheerily waved to me on the lake again a week later, saying they'd learned their lesson (though I didn't ask what it was).