A people adventure! Read all about it:

On Dec 31, 2021, we got up early to beat the lines, and drove to the Bureau of Motor Vehicles to let them know they'd misspelled the last name on our application a few days before (and yes, they had an old driver's license and passport from which to copy the details). They were closed! Oh no - I should have remembered that New Year's Eve holds a special place in my memory of 'not a good day to do business.'

Last day of the year? Why, yes, let's close the business IN ANTICIPATION of a holiday! But okay, we were out and about, and so I thought we'd go to the nearby pharmacy to pick up COVID test kits that are now covered by our insurance. There was some skepticism of this task being successful, given that the previous day's attempt had come up fruitless, and today's specific mission had already been thwarted. Now, some of you may know that pharmacies (and medical insurance) are high up there on my nemesis scale, and as you will see, this story cements that position. I opted to stay in high spirits anyhow, and give it a shot so as to salvage the early morning expedition.

They had kits in stock, but they had to be rung up at the pharmacy counter, which was not yet open. We had a 20 minute wait, so I spent my time browsing. Another assistant came up to me, having had my request explained to her, and said that they don't put them through insurance, so there'd be no need to wait for the pharmacy counter to help me. Why yes, I explained, our insurance did cover it and I had received an email specifically telling me that any places that accept my insurance would process my request. Yes, they accepted my coverage ... but, um, "maybe it only kicks in on January 1," they tried, claiming they'd not heard of the test kits being included.

I got phone numbers and emails ready on my phone as we waited for the pharmacy to open. At 9, I was greeted and the request accepted by the pharmacist without question. My 'proof' wasn't needed. However, the assistant he handed the task to had never processed a non-prescription item being covered by insurance before, and it took 25 minutes to get it done. In the meantime, the head pharmacist had taken it upon himself to process my husband's information to speed things up.

As we went through the checkout, we noticed that my address was incorrect, even though it had been 'copied' from my (requested for that purpose) driver's license. The street name was almost correct, but I now lived in Springvale, and Dale in Limerick. The pharmacist told me not to worry about it being incorrect on the printout, and that he would fix it right away. As I was about to sign for receipt of my goods, Linus pointed out that my first name was incorrectly spelled as DEBRA, as well. Oh dear! Another error. I pointed it out, but was given the same explanation: ignore it on the printout; he would fix it in their system though. I don't really have a lot of hope - do you blame me? 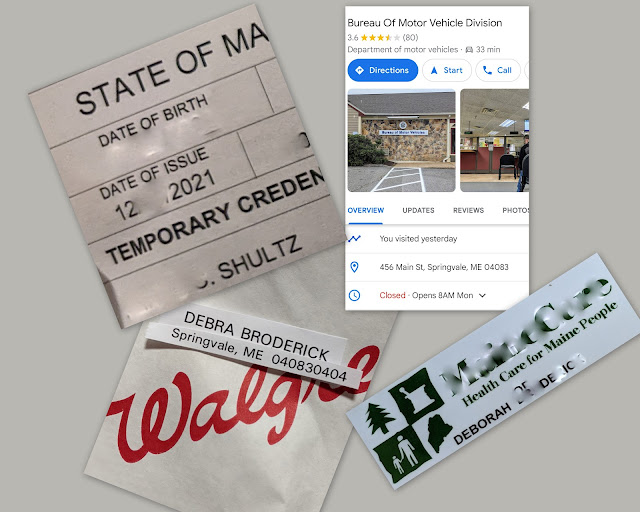 Incompetence of the highest degree! And a trifecta of nemeses to ring in the new year - is this a foreshadowing of what 2022 will bring? Not likely! I'm in charge here!

OMG! Debbie, I feel your pain. It's not that people can't make mistakes, but when they slough them off... it's not right. And to have spent time waiting for the pharmacy to open, AFTER going to a government agency that is closed in ANTICIPATION of a holiday... really?!?! Take care. This too shall pass.