I dressed up a slow cooked pork roast not too long ago. It looked so colorful and cheery before putting it into the oven, that it prompted me to take a picture, and then a blog post arose from it. To make this meal, I was winging it, not following any recipe, but going along with my own senses to create my own dish. I wanted to use up some items I'd had at home for a while.

After sprinkling the roast with rosemary, thyme and salt, I poured in a cup of 100% cranberry- raspberry juice, which I'd bought for Dale, but it's pretty tart, so thought this would help get it finished! I then added frozen cranberries that have been in my freezer since November or so, and chopped up the orange peels and unpalatable fleshy parts I'd been keeping (labelled) in my freezer (I figured old, under par, dry oranges wouldn't taste bad when cooked ... we shall see ...). I'm thinking I'll need to add a tad of brown sugar before serving. It looks very colorful ... and we DO eat with our eyes ... so maybe it'll taste okay. 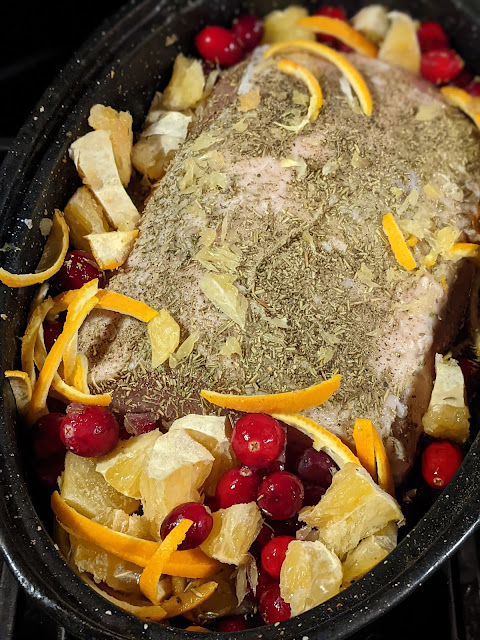 I grew up hearing 'waste not, want not' from a Mom who grew up in London during the Blitz of the Second World War. It's been instilled in me to never waste useful calories, or throw food away, and this has become an ideology that is pretty hard to break. I know that deprivation can make some people go 'bonkers,' but I'm believing that my approach is resourceful and sensible!

* It was a delicious meal! I added a tablespoon of marmalade to the sauce at the end, since it was very much along the same lines as what I'd created, plus I added some brown sugar.

I hate to crow about it, but I felt very pleased with, and proud of, the outcome. Yes, yes, my Mom would say, "self praise is no praise at all," or "pride comes before a fall" but ... it was thoroughly appreciated. Definitely worth repeating.

it certainly was excellent, I hope it can be repeated!

Well, I had a sales manager who once sat me down and said I had to practice more SSP....."what's that?" Shameless, self, promotion.........and he went on to say...if you don't believe in yourself, why should anyone else! Originally he had more confidence in my skills than I did......that certainly changed after that talk!

Looks delightful and I'm sure it tasted heavenly. My brother and sister-in-law gave me a gift package with Stonewall Holiday Syrup....and that is what I thought of looking at this. It had cranberries, orange and pears.....it is a heavenly treat, but alas, only available during the holidays!

Ooh, that Stonewall syrup sounds heavenly! And as you say, very similar to this combo

It looks and sounds so yummy! I can't even imagine what it smelled like - probably like heaven. :) Your write up made me think of my parents who lived during the depression. That certainly affected their thinking (and in turn mine). I love having the time and freedom to cook, really cook!

I really enjoyed your story!

That looks and sounds so delicious! And it’s ok to be pleased with your own creativity and talents. Hey, the way I see it, anything that lifts the spirits these days should be welcome, encouraged, celebrated. By showing how you create meaning and joy, it inspires others to do the same. One person at a time, fending off despair.

Glad you could relate, too.

Thanks Shelley - it's good to know my documented "adventures" might be inspiring. Little things do bring meaning - that's how traditions get started.